I was inspired to give this blog writing a go by one of my fellow runners and Marathon hopefuls at Northowram Pumas, Adam Standeven (https://adladblog.wordpress.com/). I don’t think I will be quite as entertaining or as good with words as Adam but I’ll give it a go.

I would describe my running journey as a bit up an down, when I 1st started running back in 2010 I couldn’t even run a mile and I had been persuaded to enter the Leeds 10K with several of my Friends. On the 7th July 2010 I completed the 10K the farthest I had ever run in under an hour and I was well and truly hooked.

The following year I signed up the Great North Run Half Marathon and continued my training increasing my distance and frequency of running and on the 18th September 2011 I completed the 13.1 mile course in 02:00:02 again the furthest distance I had ever run.

2012 saw me entering yet another Half Marathon this time in Leeds on the 13th May, my training partner had contracted pneumonia so was unable to compete so my current training partner Deke Banks took his place with very little training and wearing football trainers and socks, but his young age and background in Boxing helped him to go the distance (although he was walking like Jon Wayne for the rest of the day and night). I had trained differently for this event for the 1st time going further than the actual distance and was running up to 15 miles at least once a week with shorter runs. This obviously helped as I completed the course in 01:52:51 just 2 minutes behind Deke (01:50:58).  Deke’s day got worse as it was the Premier League decider with Manchester City playing QPR and Manchester United (his team) playing Sunderland both teams won but unfortunately for Deke City won the league with a last gap goal against 10 man QPR.

The rest of 2012 & 2013 was a bit of a write off for me in running terms after rupturing a calf muscle playing Football followed by a tear in my tendon on my right foot. Months of rest, physio and rehabilitation in the physio gym followed. When I started running again later in 2013 I was experiencing lots of pain in my knees, Achilles and calves (I struggled in the last mile or so of the 1/2’s with calf pain) meant that I had to undergo lots of tests and specialised physio and also altered my running style as I was used to striking on my toes and putting lots of pressure on my calves. I eventually got the root of the problems which were stemming from underneath my feet and after completing a few months of treatment including self massage I was able to start increasing my distances again so I applied for the 2013 Yorkshire Marathon, I was unsuccessful but was offered a guaranteed entry into the 2014 event.

2014 I was increasing my mileage once more for the Marathon and also joined the Northowram Pumas for a few runs, unfortunately a few weeks before the Marathon I was injured playing Football again (see a theme here) and had to stop training for around 5 weeks and picked up training again 5 weeks before when I should have been getting ready to Taper off I was increasing my mileage and the weekend before 16 miles into an 18 mile run my knee gave way and that was the end of that.

2015 I was back with the Pumas and had the opportunity to complete the Great North Run once again and I also applied for a place in the 2016 London Marathon via the ballot. I completed the 2015 GNR on 7th September with Deke Banks as my training partner although another calf injury put me back 10 days in August so I didn’t quite get to the distances I wanted too before the day. On the morning I had a bit of a cold and shouldn’t have really completed it but fueled with adrenalin, Lucozade Sport and McDonalds Porridge I set off far too quick and by 11 miles could hardly breath. I finished the distance in 02:05:04 which was slower than I wanted but without stopping and with what turned into a Chest Infection. Deke completed it in 01:33:14 after training properly this time and actually buying some running shoes, socks and clothes instead of his football kit. 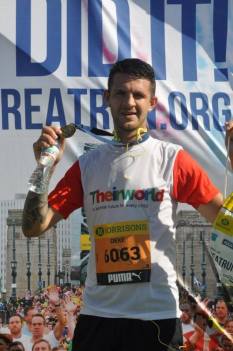 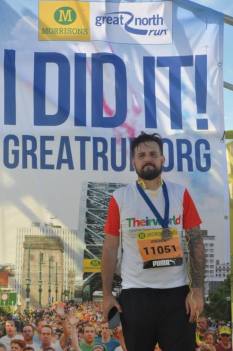 In October 2015 we completed the Bradford 10K (which actually turned out to be 9950m due to some road works and last minute course changes), still fresh from the GNR training and the 5k Park Runs we started doing in May we manged to post very good times, 00:46:45 for myself and 00:41:08 for Deke.

We weren’t as lucky as Adam and we got the dreaded email from Virgin London Marathon with the sorry Magazine. However that didn’t stop us and as I will be 40 in 2016 I felt it might be my last chance and I managed to find us a very worthwhile Charity to represent; Sense for deaf blind people. We worked together with Adam, Shaun Casey and Ian Marshall to organise the New Years Day fun run and raise some funds for our target. We still have a long way to go though and will continue fund raising and looking for sponsors. 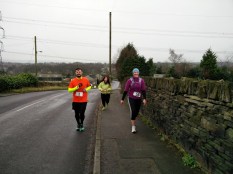 Keep an eye out for updates on my Training plan and progress with help from the Pumas.

Please sponsor us at: